After I returned from last week's North American Jewish Day School Conference in Philadelphia, I felt, as I often feel after a high-energy conference, excited and overwhelmed.

The conference theme was "Uncommon Connections: Schools, Systems and Success" which referred to the idea of systems intelligence. As a big-picture thinker (who sometimes gets lost in the minutiae,) this theme really captured my attention and imagination.

As I began to think about sharing my notes and thoughts, to reflect on what I learned and what I would do with that learning, I decided to try sketch-noting as a reflective practice. I am working on practicing this new way of making my thinking visible. I wonder if you can read my sketchnotes to understand my thinking. 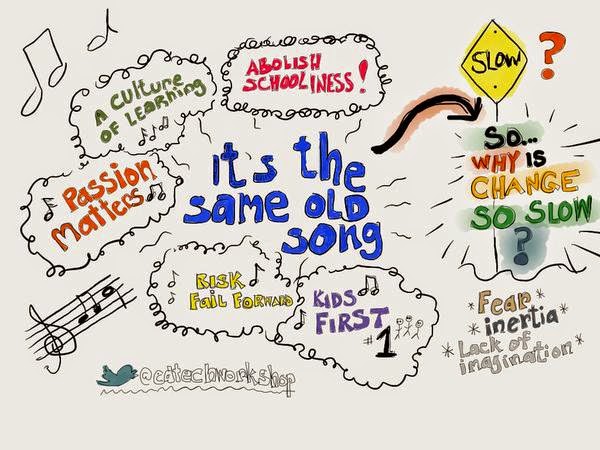 What stuck out in my mind was how overlapping and repetitive many of the themes were, or so it seemed to me. Not only am I starting to hear the same messages repeated (the same old song), but it appears that "everyone" is on-board. For example, instead of arguing against the "school should not be preparation for real life; school is real life" philosophy at SLA, it seems as if people agree completely. Of course, my observations are not scientific. There is no control group. The group who visited SLA chose to go to SLA. Does that make all the difference?

Between the visit to SLA and Grant Lichtman's sessions on innovative schools (informed by the research from his book #Edjourney: A Roadmap to the Future of Innovation), I heard several recurring themes, outlined in my notes:

So....why are we still stuck? Lichtman's response to this question was, "Fear and inertia." I would add lack of imagination. So....how do we vaporize (or at least minimize) fear, inertia and the lack of imagination that keeps our schools stuck in a time-warp?

My answer is this: we do it one step at a time. We ARE doing it. We keep on doing it. We educators look into our own hearts and minds and weed out our own fears. We stay connected.
Someday soon, everything will be different, and no one will know how hard we fought to get there. And that, I believe, is how it should be.
Posted by Andrea at 2:51 PM