One of the requirements of being a Google Certified Teacher, is to develop a "personal action plan." The idea for mine came during a discussion with our middle school language arts teacher, Deb Kuhr. Deb told me that she had been reading and discussing Simon Wiesenthal's book, The Sunflower, with her 8th graders. The Sunflower recounts Wiesenthal's personal dilemma (whether partially fiction or entirely non-fiction is apparently the source of some debate) around "the possibilities and limits of forgiveness."
The Sunflower is a book in two parts. Part one is the story of Wiesenthal's experience in a concentration camp as well as a request for forgiveness from a dying Nazi soldier. Part two is a symposium of responses.

In our meeting I learned that the students, moved by the deathbed scene, wanted to create a video re-enactment of that part of the story. I thought it would be interesting to crowdsource the symposium, also through video. We shared the idea with the students, showing them the It Gets Better Project as an example.

Next we created the "Would You Forgive?" Google site as a home for the project. The students worked on writing the descriptions for the various pages of the site. They continued working, as part of their language arts class, on the script for the reenactment which was filmed after school and edited by one of the students over spring break. The students also wrote essays articulating their personal responses to the dilemma. Additionally, they video- reflected on the meaning of the entire project.


The Sunflower- Student Reflections from MJGDS Classrooms on Vimeo.

At the recent edJEWcon conference, hosted by MJGDS Mrs. Kuhr and the 8th graders shared the project and the re-enactment with educators from other Jewish schools, requesting that these teachers show the video to their students and solicit video responses. It was impressive to hear the students speak so articulately about their work. 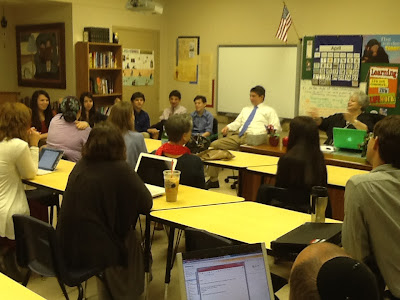 From my perspective, working with a small class of "seniors" has had its highs and lows. There have been some real "blah" moments, some confusion around project management and productivity, even some questions as to "why are we bothering to do this?"
The edJEWcon session was a high point. The students watched others watch their video. They were able to see and hear outside appreciation for their quality work. This had an impact that surpassed any amount of teacher feedback.

We still have a lot left to do and not much time left in the school year. The students are excited to promote the site and the re-enactment, to receive and review responses. It is our hope that this work will reach people, touch them and inspire them to think.

Learn•Reflect•Share...and the Slide I Forgot

Step 1: Think/brainstorm in a general way, about the topic. 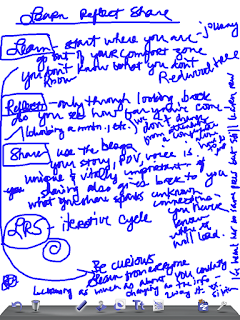 Step 2: Start creating slides.
Step 3: Do tons of thinking and research (including searching for and reading related material, looking at related slide decks, etc) as I add slides.
Step 3.5 (which is part of steps 2 and 3): Obsess over slide design, search for or create the perfect  image. I can easily spend 20 minutes fine-tuning the design of a single slide.
Step 4: Ask a trusted colleague to review the slides and give feedback.
Step 5: Make changes, additions, etc.

All the while I am working through these steps, I am thinking, thinking, thinking about the slides and how they visually support the message I hope to convey.
By the time I am ready to present, I have spent many hours, while working on the slides, thinking through my ideas. I am prepared. Even with all the thinking, I don't know exactly what I will talk about with each slide until I say it. I sort of make a decision to just trust whatever comes in the moment as being the right thing to say...it keeps me from over-thinking or getting nervous.

The nicest thing is receiving positive feedback after a presentation. It feels like the message I worked so hard to craft was received and resonated with the audience. I really enjoy reviewing the back channel and being able to immediately reflect on what was shared there.

Even though this process seems to work for me, I always go through a stretch of time afterwards where I think of all the things I really should have said. Normally this phase only lasts a short time, and then I let it go.

I was honored to be able to share the opening keynote for this year's edJEWcon. I tried to set the tone for a conference based on the idea that learning is a cyclical process, one that involves reflection and sharing. Immediately afterwards I thought of the things I shoulda, woulda, coulda said...and then I forgot it all in the many wonderful conference experiences that followed and occupied my mind.

Except for one thing. In all the experiences that followed, and in all my reflections on those interactions, I realized that there was one important slide I totally forgot. It is not random nor is it replaceable. It is a vital component of the learn, reflect, share cycle. VITAL. 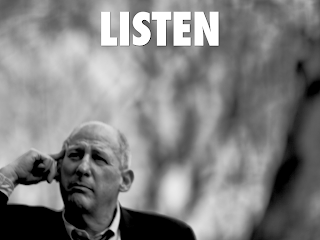