Who Owns the Conference?
Every fall and every spring, a letter goes home to parents with the schedule for parent-teacher conferences. A line at the bottom reads, "Please remember that students should not be present at conferences."
Every single time I read this I think, "This is really missing the point."
If our goals are to empower students and focus on individual learning, doesn't it make sense that students should be present when the important adults in their lives meet to talk about their learning, their growth, their goals?

I was excited when, in the course of writing professional development plans with teachers, 5th grade teacher Shelly Zavon expressed an interest in focusing her PD on a student-centered answer to Alan November's question, "Who Owns the Learning?" Shelly is already using several of November's "Digital Learning Farm" models and ideas in her classroom, so we decided to delve into something new by exploring student-led conferences.

(I should say that in the 1990's, when I taught in San Francisco public schools, student-led conferences were a fairly common practice. Our challenge was often getting anyone to show up for the conference. So, I have been surprised by the resistance I've encountered when I've suggested that students belong at the conference table.)

We began by reading and researching- looking for models, examples, and stories. Shelly, Silvia and I created a collaborative Pinterest board to share our finds.  Everything we discovered from the field was positive and reinforced that this was the right direction for a school dedicated to nurturing a culture of reflection and growth. 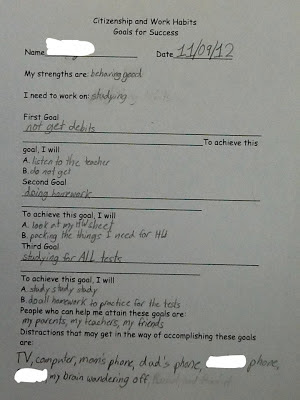 As far as preparing the students, Shelly found a model she liked and made time for the students to reflect. She asked the other teachers to write goals for each student, and the students used those goals as part of their own goal-setting. I was basically there to watch and learn, to support and champion the process.


Is Pushback Inevitable & Even Necessary?

One thing that was interesting and is worth noting is that we had a "moment" of expressed negativity from the students just as we were beginning the most focused part of the preparation. Seemingly out of nowhere students told us they were "against" the student-led model. What they expressed was anxiety, lack of confidence and a discomfort with change. They were overly worried about "bad grades." They didn't really want to come to school (for only 20 minutes) on a day off! One honest student admitted, "Sometimes I tell my parents and my teachers different things; I don't really want to have to talk to them together."

We also heard uncertainty from parents and others. What if there was something that shouldn't be expressed in front of a child? What if the conference was needed to begin a "difficult conversation?" Although I usually am quick to question myself, in this case I remained unwavering in my belief that students belong at the "conference table."
We decided to make the SLC's optional. If a parent really wanted the traditional parent-teacher conference, they could forego the student-led. However, each student would still participate in the reflection and preparation. We offered to parents that they were welcome to schedule another meeting with the teacher at a later date if they felt that it was necessary. In the end, every parent participated in the SLCs and what we heard from parents and students was overwhelmingly positive.
The video really says more than I ever could. Please watch it!

What's Next?
As part of our action research, we are collecting and processing feedback from all parties. Students were asked to blog about their experiences and feelings after the conference, and parents were requested to comment on their child's post. We have also shared a survey with parents.
Students (who, remember, expressed fear and opposition before the conferences) were overwhelmingly positive in hindsight. Many said they don't want to have to wait until spring to participate in another conference; they wish conferences were every nine weeks!

Students Reflect:
Ben C "What is a SLC?" wrote:


I think the best thing about this experience was me sharing my work face-to-face with my parents. Another thing I like about the conference was explaining to my parents what I did and why I did it instead of my teacher trying to do it for me. I really like SLC and I am looking forward for the next one.


The best thing about this experience had to be not waiting for my parents to come home and have to tell me what happened, so I think the best part of the student led conferences was definitely being there when people I trust talk about me!

To read more, check out the 5th grade student blogfolios.

My hope is that this successful experiment was not a one-shot deal, that this is the beginning of a process of change in the way our school views parent-teacher conferences going forward.
Posted by Andrea at 1:05 PM

Email ThisBlogThis!Share to TwitterShare to FacebookShare to Pinterest
Labels: SLC