We did it.
We had an idea, a vision. We dreamed it. We made it happen. edJEWcon- a learning conference, similar to Educon at Science Leadership Academy in  Philadelphia, but for Jewish Day Schools (who cannot attend Educon because it falls over Shabbat.)
Here are the words I shared in my introduction to the opening keynote:

We often talk about 21st century learning in terms of the skills needed to be successful in this technological world. One of those important skills is collaboration. edJEWcon is collaboration at its best. This conference began as a conversation between Silvia Tolisano, Jon Mitzmacher and myself. It grew to include Elaine Cohen of Schechter Network and Rachel Abrahams from the AVI CHAI Foundation. We appreciate not only their support, but their ideas, questions and push-back in the beginning stages.

Rachel encouraged us to "think big" so we did- we dreamed about speakers of the caliber of Heidi Hayes Jacobs and Angela Maiers, as well as the idea of providing "toolkits" to the school teams that would attend. We are so grateful to AVI CHAI for their generous sponsorship of edJEWcon.

All of you sitting here today, 21 school teams and 14 partners from a variety of Jewish agencies, are our collaborators as well. Without you making the trek to Jacksonville from all over the United States and Canada, there would be no edJEWcon. And of course, the reason we are hosting the conference here is because all of our MJGDS teachers, students and parents are partners on this learning journey.

The next step is to reach out, through the tools you have received in your toolkits and brought with you, through the blogs on the edJEWcon website, through Twitter and through other digital tools- to document and reflect on what you are learning- to collaborate with each other and to share with others who are not in attendance either at the conference or at a particular session. edJEWcon is collaborative, co-created learning. The whole will be greater than the sum of its parts.

Collaborative, co-created learning. My big takeaway is almost a full-circle spiral. I "knew" it to begin with, but now I understand it in a new way as I experienced something extraordinary. All leadership is collaborative, co-creation. No one can create anything extraordinary without tapping into the brilliance, hard work and passion of others. There is no creation without people. 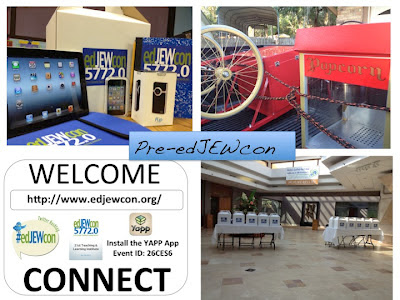 edJEWcon was an idea.
It was a lot of work.
edJEWcon was a website, a Google form, a Twitter feed, a whole lot of emails. But for all the preparations, edJEWcon was nothing without the people. People who came. People who helped. People who shared and learned and tweeted and connected. People are the magic that breathe life into an idea. 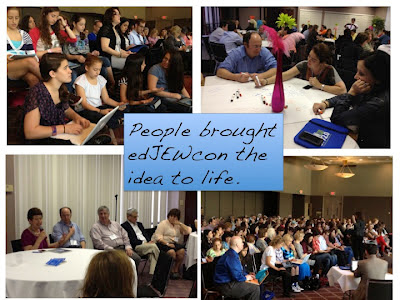 This dovetails with Angela's inspirational closing keynote, "Using Technology R.I.G.H.T." Using technology isn't about the technology, it's about the people. Social networking- about the people. Teaching and learning- yes, it's about the people.
There is lots more to reflect upon in detail, including the keynotes, but for now I want to thank all the people (and there were many) who supported and breathed life into edJEWcon- from the very beginning until right now (which is not the end by any means).
Posted by Andrea at 2:32 PM

Fabulous success - I hope you are basking in the glory as well as reflecting!!

Andrea, thank you so much for dreaming up this amazing conference. I left there so inspired and excited to be a teacher. Can't wait for the next one!!! Kol Hakavod!