We Are Not Alone...The Power of the Network

In my role as one of our school's two 21st century learning specialists, I am tasked with presenting a 2- hour professional development session for teachers on the 2nd day of our pre-planning week. If you know teachers during back-to-school time, you know that they can be a bit of a tough crowd during this week when they have so much to do setting up classrooms and preparing for students.

I really want to make those 2 hours meaningful, inspiring and totally worth the time spent away from the work that needs to be done in the classrooms. I love the idea of opening up with a TED Talk to get people feeling inspired. At our PD day in January, I opened with Adora Svitak's fabulous TED Talk "What Adults Can Learn from Kids." It was well-received and generated some excitement and fun discussion.

But this post isn't about which TED Talk I'm going to choose. Nope. This post is about what happened when I did what I usually do when planning any type of instruction these days. I ask my trusted network.

I have truly, completely, totally embraced the "together we are smarter" idea to the point where I don't even try to think alone anymore. When it comes to TED, even if I watched one TED talk every single day, it would take several years to watch them all! (When I got my ipad and downloaded the TED app, I did intend to watch one talk a day, but you know how those things go...) So, naturally I turned to my network on Twitter.

The tweet was re-tweeted by Rachel Abrahams and between my tweet and her re-tweet, I received a handful of responses (newest on top). 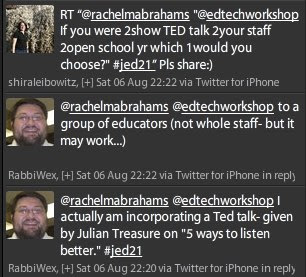 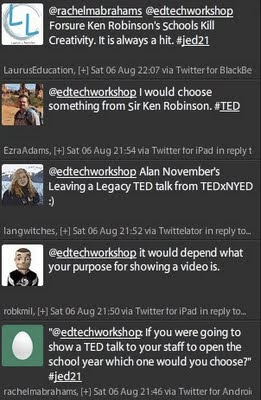 Since I've already seen Sir Ken Robinson's TED talks "Schools Kill Creativity" and "Bring on the Learning Revolution", as well as Alan November's TEDxNYED talk, I started by watching Itay Talgam's brilliant, "Lead Like the Great Conductors." My husband and I both really enjoyed it. Next I watched Julian Treasure's "5 Ways to Listen Better."

This was on Sunday morning, and just watching those two talks took almost 30 minutes. That was all the time I had to indulge in the pleasure of watching TED Talks (although it WAS for work!). A little later in the day, I looked at Facebook and saw that TED had posted my question on their Facebook page.

It was amazing....and at the same time overwhelming! I could barely watch two TED Talks. I skimmed the FB comments (LOTS of votes for Sir Ken Robinson), but I couldn't even read all those comments!!

and another tweet which linked to this post on the TED blog "What TEDTalk would you play to open the school year? We counted your (almost 1,000) responses..."

There is so much to this. First of all, I now have the opinions of over 1000 TEDTalk watchers. TED writer/editor Ben Lillie went through the freeform comments and tallied the results. Seems that Sir Ken is the favorite by a mile, but I have a great list of the top 14 vote-getters to watch, many of which I haven't yet seen. And that is doable.
Besides that, I have a good story to share! This is a terrific example of the power of networking- what we're working to bring to our school.
Collaboration. Social learning. Content curation. Filtering. Connecting.
Ideas worth spreading.
Thanks for the help everyone.

PS- After speaking with my partner, Silvia Tolisano this morning, and connecting what I'm doing with what she's bringing, we have decided to open with the Alan November talk. It really speaks to what we are going to be doing this year with our 21st century learning program.... which involves, among other things, having our students write and present their own TED Talks. There are so many incredible thinkers; it's really an uplifting change from watching the network news shows' tales of gloom and doom. I challenge myself to revisit my intention to watch one TED talk a day!

This was a great post, Andrea. I'm going to cite you in my uni assignment on participatory culture. Thanks for sharing!