The Garden of Tweetin'

I was asked to "intro twitter" for my cousin and her friend. I've been meaning to write a twitter blog post for a while now, so I thought I would gather some favorite resources and share a few thoughts.
Here is a helpful intro for educators from Langwitches Blog: So, What About This Twitter Thing?
So, What About This Twitter Thing
View more presentations from Silvia Rosenthal Tolisano

Beyond the most basic intro, to really "do twitter" you have to just go ahead and do it. Twitter is a garden of sorts. To plant a garden, at some point, you have to get in there and get your hands dirty. There's no "right way/wrong way"...there is just your way which you can only figure out by figuring it out. You can read guidebooks, ask an expert, learn from your mistakes... eventually you come to realize that, with attention and care, you have gardened your way to a decent little patch that makes YOU happy. 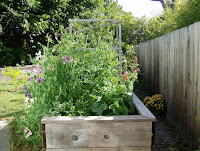 But that doesn't mean that MY garden- with it's marigolds and tomatoes, usually in need of weeding- would be the right garden for YOU. For example, if you were planting a vegetable garden, you would be likely to choose vegetables that would be useful and valuable to you and your family. It's the same with your twitter garden. The power of twitter lies in the opportunity to build a useful and valuable network, of like-minded (or different-minded) interesting people. My twitter network consists mainly of educators. Many educators on twitter use the term PLN- personal learning network and use twitter for their own lifelong learning.

-I like to be able to view multiple columns showing different streams. It's easy to add and change them, too.

-I like the "edit then retweet" capability which the web RT doesn't offer.

-I tweet from multiple accounts, and that is very easy to do in Tweetdeck where I can be logged-in as more than one tweeter. (I have also tripped myself up this way by tweeting from the wrong account. Oops!)

Just in case you were wondering, what I don't like about Tweetdeck is the newer "deck.ly" feature which lets you go over 140 characters. It just doesn't sit right with me- the whole genre of twitter is 140 characters or less. I have disabled it on my Tweetdeck. Go to "settings" and uncheck "Use Deck.ly for sending long updates."

•Filtering the mad, mad world of too-much-information is a high art. Again, everyone does it differently BUT (since you asked my opinion)- don't habitually re-tweet articles you haven't read or at least skimmed. Being a good filter, and only sharing what you think is truly worthwhile and relevant builds your credibility.

•Follow celebrities if it makes you happy and adds something to your twitter stream, but that's not really the "twitter thing." Twitter is about having lots of different interesting people to talk to and listen to. Choose who you follow thoughtfully, just as you would decide what to plant in your garden. For more on this idea, read this great post, "Curating People" by self-proclaimed "mayor of the internet" ijohnpederson.

Because I know you really want to know, these are the celebrities I follow (at least right now)-

Dan Millman (author of The Way of the Peaceful Warrior)

None of them follow me back. They also don't tweet much and, most likely, someone else tweets for them anyway.

•Be yourself. If it's interesting to you, share it. Follow real people who interest you, and add something to the conversation. Give and take.

One last analogy :) -- Think of twitter as a giant cocktail party. Who do you choose to talk to? The spammer who is just there to sell something or get you to join an MLM scheme? The self-promoter who talks incessantly about herself? The person who has nothing original to say and only repeats what he has just heard someone else say? Or the interesting person who listens and adds something intelligent to the mix? Be that person.

Great minds must think alike. Just after I wrote this, Silvia Tolisano shared with me a new presentation she created on personal learning networks, also using the idea of the garden as a point of reference.

I am a student in Dr. Strange's EDM310 class. I must admit that using twitter seems intimidating to me. I have an account and am currently following many educators. I have discovered information through tweets they have made that is sure to be very helpful when I begin teaching. One of the largest difficulties I have currently is having something meaningful to tweet. I am still getting acquainted with the use of technology in teaching so hopefully as my knowledge and experience grows my ability to share will also. I have come into contact with some amazing and driven educators on twitter and count myself fortunate to follow them and include them in my PLN. I will be following your blog for an assignment (gladly) and posting a summary by 4-17-11 on my EDM310 class blog. I would love for you to pop over and read it sometime.
Thank you for sharing your knowledge and experience.

Hi Pamela,
My recommendation for having something meaningful to tweet is don't over-think it. It doesn't always have to be earth-shattering. It's just a bunch of people out there and you never know who might be interested in whatever you have to tweet. (My cousin, who I did the lesson for- the one I mentioned in the post- said, "I'm just not very interesting." But I think she is one of the most interesting people I know, so...)

Sharing on twitter has become a habit for me. If I read something I like, I tweet it. I have learned so much from twitter and made so many interesting connections. I believe it has definitely made me a better teacher. I look forward to reading your tweets.

Twitter has become such a huge means of communication and connection! I love that everyone is using it for productive purposes. This gives teachers so many opportunities to share, create, and combine thoughts that will better our students' opportunities to learn.! I'm so glad that you did such an extensive write up about how to use it, and also your recommendations for using it. I will definitely use and share some of your tips!
Carey Dekle
EDM310
University of South Alabama