The Flat Classroom- Are We Really Ready?

Global Learning=Good
Global collaboration, global awareness, global connections.... these are some of the exciting possibilities of technology in education. Having students learn about, with and from their peers around the world has inspired some amazing projects like the Flat Classroom project and Around the World with 80 Schools. I believe in the power of education to build a more tolerant and peaceful world.
Last year, middle school students at our Jewish Day School had some amazing skype calls with students from Muslim schools. They compared prayer books and each group showed the other how they prayed. Afterwards, our students reflected in writing. Here is what one 7th grader wrote about that experience: 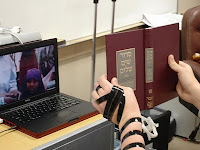 Interestingly, we discovered that Muslim and Jewish beliefs are very similar in certain
ways. We both have certain times to pray, traditional articles of clothing, forbidden foods, as well as so much more.

The Project
When I heard, recently, about a project for students from around the world who speak both English and another language, I thought it was a good fit since our school has a dual-language program, English and Hebrew. The project organizer is a world language teacher in an English-speaking country who I feel I "know" in that twitter/blogger way and whose work I respect. The project uses food as a theme- sharing our foods and our languages. Liat, our fourth grade Hebrew teacher, agreed to work with me; the students were interested as well.
Clusters
Let me make it clear that, while I have joined many of these projects, I have never organized one. I try to be a helpful participant, to stay on top of things and to contribute meaningfully, but I can only imagine the work that goes into actually organizing it. The organizer of this project decided that it would be more manageable to group schools into smaller clusters to allow for more extensive contact. Our school was "clustered" with one school in Australia and a second school in an Arabic nation. I was very excited to be partnered with the Arabic school. Because I believe that, through these types of projects we can teach peace by accentuating how much we are alike and by planting the seeds of understanding, I thought that having our school partnered with this school represented a unique opportunity.
As I have stated, our school is a Jewish school with an English-Hebrew curriculum. We have strong ties to Israel- the Israeli flag flies alongside the American flag, students sing the Hatikvah (Israeli national anthem) every morning, many of our teachers are Israeli. 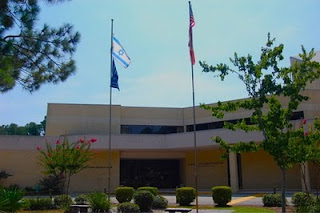 It is widely known that there is a history of conflict and violence between Israel and its Arabic neighbors. It is truly a horrible situation that exists between these countries, and I can not claim to be an unbiased observer. Still I felt excited that our two classes might have an opportunity to talk about lunch and languages as part of a friendly school project.
It was not to be. Almost immediately after the cluster groupings were shared, I received another email saying that there was to be a change. That change was to separate our school from the Arabic-speaking school. I was disappointed but not surprised.
And then...
As part of the project, each school was to contribute a slide that showed a picture of a "typical" lunch in your country, as well as the name of the country written in your two languages. Here is the slide we shared: 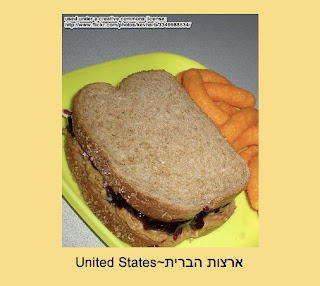 Pretty benign, right? A PBJ sandwich with some cheese puffs- a typical lunch for kids at our school. It was interesting for our students to hear the comments as other schools reacted to our slide- they liked the sandwich, they didn't like the sandwich, the lunch looked unhealthy, etc.
In the course of sharing information about our school and viewing the media shared by the other schools, we visited the wiki page of the Arabic school. First we looked at pictures and video showing typical food from their country, which is located in the same part of the world as Israel. Liat, who is Israeli, pointed out the similarities between their food and Israeli food (more alike than different?) Then we watched an adorable video of the students reacting to the slideshow. Liat and I both noticed that all of the slides were shown except for the one from our school.
I had not reacted when our clusters were changed, but now I was upset. The teacher would not even allow her students to view the slide from our school? I felt that to purposely ignore one school went against one of the main goals of the project- cultural awareness.
Naive
I emailed the project organizer to share my feelings.

Today we watched the "reaction to the lunches" video from the school in ___, where they showed every slide except for the one we uploaded, which had some writing in Hebrew. What is the point of doing a "global awareness" project if not to promote tolerance, acceptance and eventually to teach the next generation that things like hatred and anti-semitism must be overcome?...I feel that no school in the project should be allowed to simply ignore another school because of language or culture. I am really upset by this... How do you teach 9-10 year olds that people in the world hate Jews so much that the adults will not allow the children to look at a slide that has Hebrew writing on it?

The resulting email conversation really opened my eyes and made me realize how sheltered and naive I am. This is from the teacher in the Arabic-speaking school (from an email she sent to the project organizer):

I do believe that we are really one world and one heart, no matter where we come from or what our religion is...We can't make any relation with Israel no matter what the relation is. It will be dangerous for me and for my family...I feel sorry not being able to communicate with her...but this is the situation in our country.

I can not imagine putting myself and my family in danger through my participation in a project, no matter what countries were involved. From my comfortable vantage point here in the US, I have been able to shelter myself from some truths about the world. I allowed myself to believe that all you need are good intentions, that individuals connecting could eventually change the world. I still believe in education and friendships, learning about others, tolerance and global awareness. I just feel incredibly naive and incredibly grateful that I live in a place where I am able to have such naivete. I am not the only one. From the project organizer (who lives on another continent):

When I made up those clusters I had no idea that having your two schools together would be a problem. When ___first emailed me I immediately thought that I should have been more aware and perhaps not put your two schools in the same group to begin with which is why I was so quick to change the groups...it is not a situation I am very familiar with...

Here is another point-of-view, from the Rabbi who is associated with our school:

Given the political climate in ______, this teacher may be justifiably fearful (as I’m sure that there would have been German teachers in the 30s). That being said, if the [project] folk can rationalize the discrimination (after all, this is not our school issuing Israeli political propaganda, but simply existing and being itself), it does quite the opposite of promoting co-existence. Participants in______ can’t have it both ways – global understanding . . . except for those whose right to exist we won’t acknowledge.

I find all of these reactions understandable and also confusing. I understand the emotions of fear, anger, denial and regret. I understand being unfamiliar with certain parts of the world and their problems. I don't understand what to do with it all.
Never would I want to put another teacher or her family at risk. Nor do I want my students to learn firsthand, through a school project, about hatred, discrimination, anti-semitism/anti-Israel or that the world can be a confusing, conflicted and violent place. It is especially difficult when these harsh sentiments are directed at them, as Jews and supporters of Israel.
To be honest with myself, I am nervous about posting this. It feels like I'm stirring up some dust that might turn out to be poison. However, I feel hopeful that something good might still come of it.
Image Credit: AWW80S-Skype with Minnesota
Posted by Andrea at 12:15 PM

Thank you for being so brave and posting your reflections. You wrote an honest entry about your feelings and reflections. You have brought to the forefront that there are many things to consider when embarking on these global awareness projects. Thanks for sharing your experience. I'm certain others can learn from it. It's helped me reflect too.

You ask some honest questions, the most important being in your title I think - are we really ready? I think we have to be because if nothing else, lessons are learned from issues that arise from these sorts of interactions and that benefits those involved, and helps them to learn more about the world. It is a pity that some teachers have to live in the sorts of situations that the Arabic speaking teacher has to live in and hopefully the future will bring us a place where these sorts of things are not longer problems, but it is important to push forward with these sorts of projects and interactions because hopefully they can contribute in some way to that future we all want.

It sounds like this project wasn't the learning experience you had hoped it would be, in many ways. However, it became a learning experience of an entirely different kind (including for those of us reading). I agree with you that it is easy to live comfortably here and have no idea of the challenges faced in others parts of the world. I appreciate your willingness to share this.

Thank you Angie, Jess and Jenny, for your comments. I was a bit afraid of what kind of comments this post might bring since I know this can be a heated issue.

@Jess- I agree that we have no choice but to be ready to help our students make global connections. Avoiding problems or pretending they don't exist doesn't do much toward solving them, does it? That said, we have decided not to discuss this with our students. Liat feels that they are just too young to understand and that it would serve no purpose. She is currently teaching about Haman, who wanted to annihilate the Jews in ancient Persia. It is difficult enough for them to understand that kind of hatred in times past, let alone trying to teach them that it still exists.

@Jenny-I had such a hard time coming up with a title for this post. I wanted to call it something along the lines of what you wrote in your comment--"it became a learning experience of a different kind" or " the one who ended up learning the most was me."

I just want to add that, at this moment, I feel positively about things due to the openness and willingness to engage in conversation of both the project organizer and the teacher in the Arabic country. I did share a draft of the post with that teacher before publishing it. She requested that I remove mention of her country to protect her anonymity and kindly gave me permission to quote her.