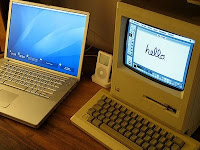 Actually, it's a true tale, not a fable. You can decide for yourself the moral of the story.
I am fairly liberal with my follow-backs on twitter. If the person is any type of educator or seems (based on their tweets and other stats) fairly interesting, not trying to sell me something(a big one) nor on a quest to follow thousands nor playing some sort of follow-and-seek game, I usually follow back.
Anyhow, I got followed a while back by a guy whose name I'm not going to use in this story. I'm not sure why I decided not to reciprocate the follow, but I didn't. I couldn't tell much about him from his profile or picture. Definitely had a sense of humor, not following many people at all. Wondered why he followed me. Maybe a fluke?
I noticed, though, that he was quick to @me in response to any of my computer question tweets. Recognizing his worth in my network, I quickly corrected my earlier non-follow-back. I still had no idea what value I brought to him, nor why he chose to follow me. It was pretty obvious that he wasn't a teacher, and, aside from being a family-man with a sense of humor who was quick to help me with computer-related questions, I didn't know much about him.
Recently, I tweeted asking for help with a server problem. He dm'ed (direct messaged) me and told me he could help me but easier to ichat than to dm back and forth in twitter
As we started chatting he made the disclaimer that although he worked for Apple, he wasn't helping me as an employee of Apple.
Fine by me!
Not only was I able, after our brief chat, to fix the specific issue, but I gained a better overall understanding of the server. I have been in-over-my-head with the server for years. Reading through the big, fat training manuals has not helped me understand one thing.
Later, out of curiosity, I googled him. He is a senior engineer for Apple.
I still have no idea why he follows me!
image from gesteves.
Posted by Andrea at 10:46 PM

Interesting story. I was glad to hear it had a happy ending.

I just think it is so cool that you can have access, on twitter, to people that you could probably not talk to in "real life." Like I could never have a senior engineer from Apple just help me over ichat by calling AppleCare!
I guess I was trying to show that in my little story, as well as a "be careful who you follow/don't follow." The fact that I almost discounted this person and didn't follow him...you just never know who anyone is.
I have been put off by some of the educational leaders, the "big names" on twitter who have thousands of followers and only follow back a few. I think it says something about where their heads and hearts really lie.
It's all pretty interesting, the twitter phenomenon!